A couple more schools included updates this week, but many others haven’t posted since the Annual Meeting. We want to hear what you’ve been up to! Write up a quick recap and then begin weekly posting again. SEAL Con is just over 2 months away so now is the time to ask questions and get help so you can finish off your research project as best you can before May 13.

First up, Beckman HS Group 1 tested a Ni(NO3)3 0.04M plate, but it didn’t have very good results. They also prepared a plate with 0.04 M Fe(NO3)3 which had shown promising results last time on an identical plate. They are currently testing the third iteration of this plate. The first iteration had high results but the second seemed to have a leak in the epoxy, which may have affected the results, so they are following up with their results with a duplicate of the original plate. Group 2 is testing a plate with multiple elements (Cu(NO3)2, Fe(NO3)3, and Al(NO3)3 all with 0.03 M). They decided to do this after doing research last week and concluded that this combination might have promising results. In the long run, they plan to consider remaking and improving this plate, and perhaps altering the molarities and the ratios to see how that might affect their results. Group 3 is trying two techniques in plating. They used cobalt nitrate and iron nitrate and tried layering them on the plate (iron on top of cobalt), as well as mixing them and spotting them. They saw both ideas at the CCI conference and saw good results. For the future, they will check their results to see which method works better and use this as a basis for future trials and use this technique for other combinations if it does show positive results. Group 4 is testing a Cu(NO3)2 with 0.03M duplicate plate after getting some red results on the original. The new results were not outstanding, so they decided to try different metal nitrates but want to stay with the same ratio for future tests.

Next, Poly was finally able to run a HARPOON experiment! Their mentor, Josef, was able to fix the power supply box. They took pictures every 30 seconds for 15 min of a plate spotted with the HARPOON standard, Ni:Fe:CO 1:2:2. Next week they will do a data analysis of these photos in ImageJ as well as start on Raman Spectroscopy experiments. 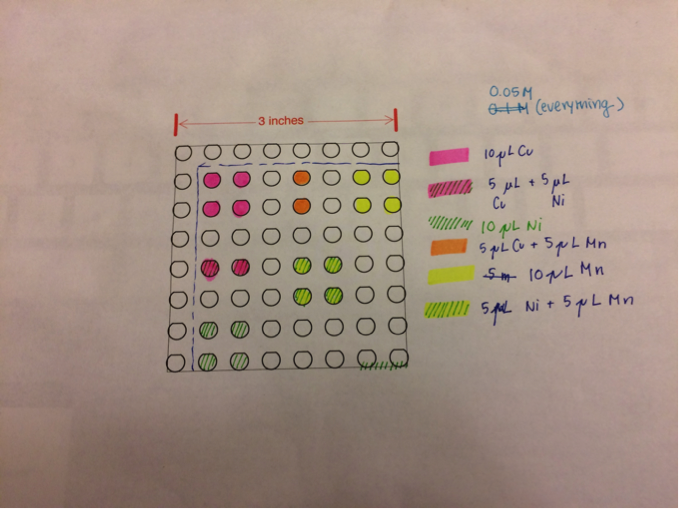 They were unable to test previous plates since they lost one and the other was left in the kiln for too long, resulting in the warping of the FTO coat on the plate making it nonconductive. They used the metals (Cu, Mn, Ni) because they are found in a photosynthesizing protein. Manganese is suspected to be the material flaking, and expect to see brown flakes floating in the NaOH solution if so, as well as inconsistent measurements of current in specific areas. If there is flaking, they plan to ozone treat the plate and make an identical plate to test. If even after there is still flaking, they will ozone treat individual plates, with each metal having its own plate, isolating each metal from each other. Also, they are looking into the coffee-ring effect that can result from drop-casting, and will test the two identical plates next week and talk about what they found about the coffee-ring effect.

San Marino’s Team Wand, also could not test the plate they made last week because it had the same problem of the FTO melting.  The temperature of the kiln was too high and the plate was left inside for too long, causing the FTO coating to melt and become warped, similar to cellophane.  During this week’s meeting, they remade the plate that was ruined, which contained vanadate and varying ratios of nickel.

Concordia analyzed results from the CON8 plate that was zapped with the Tesla coil and concluded that it discolored the spots of bismuth nitrate and ammonium vanadate. The discolored spots that they used the Tesla coil on had very low results. Then, they brainstormed to figure out what to work on next. They recorded previously used metal oxide solutions and wrote down others which they would like to test. They didn’t officially decide what materials to test yet, but we prepared a blank plate for next time.

Finally Mayfield’s Team SEA tested the aluminum copper plate, but it did not produce quantifiable results. They researched a few other good conductive metals but for now will stick with the elements they already decided on, testing the iron chromium plate next week. Team RAM tested plate 14 that contains bismuth, vanadium, and nickel with the ratio of 8:1:8, 8:1:13, 8:1:16. The results we’re not bad and performed better than plates 11 and 12. They also spotted plate 15 containing bismuth, vanadium, nickel, and tungsten with the ratio of 8:1:1:8, 8:1:1:13, 8:1:1:16. Team PEAK tested plate 23 (split CoZn 6:1 and FeZn 6:1 with multiple layers), but only got dark blue results. They plan to test the same materials with layering again, but without annealing them in between adding the layers. The previous plate was annealed after adding the first layer, which caused large spreading of metal solution when the second layer was applied and may have impacted results in unexpected ways. They started making plates 24 (FeZn 6:1 with layers) and 25 (CoZn 6:1 with layers, which they will finish next meeting with the additional layers.