Beckman  Group 1 created a sodium sulfite solution for testing. Because the epoxy has proven to be weaker when being put into the testing solution after five to ten minutes of drying, they are waiting for 45 minutes for it to dry before testing. Group 2 is testing a plate with chromium nitrate with iron standard that they made previously. They also plan to test a plate with zinc nitrate, chromium nitrate, and iron standard afterwards.  Groups 3 & 4 collaborated in continuing to test the effect of varying lengths of UV treatment of the FTO plates. They have prepared the plates of 5 min, 10 min, 30 min and 60 min and they are trying to test the plates. Today they are running the 5 minute plate. Last week, they realized that their iron nitrate solution was old and looked cloudy, which they predicted may skew their results. Today, they recreated the solution to make the same 5 minute UV-treated FTO plate to compare it with the old 5 minute UV-treated FTO plate to see if there is any difference.

Alverno has updates from their 4 teams. Acid: Made 4 plates of Nickel Nitrate and Nickel Nitrate Titanium Dioxide to test this week. Basic: Have 4 plates to test, all of which plates have been made with two different metals at the concentrations 0/100, 25/75, 50/50, 25/75, and 0/100. There are a total of 14 spots on each plate. The metals were chosen at random in hopes of stumbling upon a combination that works very effectively. CO2: Figured out a relatively good concentration of TiO2 and the acid group is going to proceed and use that concentration with their future studies. The CO2 group on the other hand had abandoned the idea of TiO2 in their plates, and started randomly picking metal combos from the periodic table (with certain selections). The SEAL kit has been malfunctioning so they are holding back on making more than their existing 10 plates until that is resolved. DOLPHIN: They have cut the printer in half so that they can raise it’s height for the seal plates and they will reattach it with a spacer.

Canyon Crest Academy has gotten organized and created a sheet listing out all of the plates and materials made so far (to avoid testing duplicates). They were also able to create an two additional interesting plates using Iron Ferrocyanide, Ammonium Cerium Nitrate and the potassium chemicals Potassium Dichromate and Potassium Permanganate. In preparing these plates, the metal cations in the solution were not homogenized in the solution: causing the hot-plated slides to have some spots with the coffee ring effect or small pieces of precipitated matter. They expect this to impede getting “good data” since the spots will not be tested as completely as they would otherwise. To avoid the rapid evaporation in future, they will set the hotplates on lower temperature settings and keep a keener eye on the homogeneousness of solutions. Because of their surplus of prepared and epoxied plates, the next meeting will be dedicated to testing existing plates. 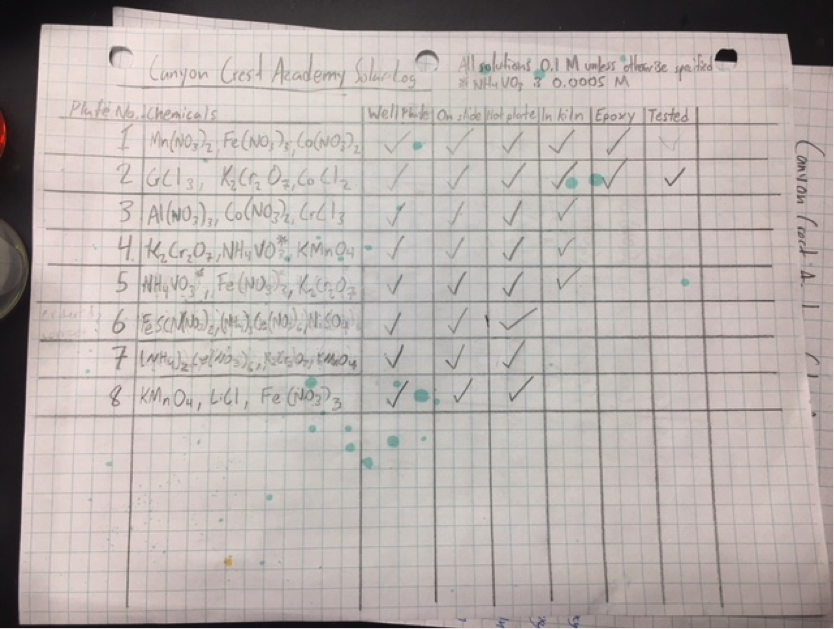