Double post this time- last week only had a couple updates, and it looks like only the same few teams posted again this week. The blog will only be useful if everyone is consistent with their weekly posting, so please set reminders to update your google drive doc every week (and thank you to those teams who do post consistently)!

Poly attempted HARPOON one more time, but ran into a new hurdle: the power supply wasn’t working properly. There is also a battery pack power supply that should work with a fresh set of AAs, so you can try that next time. The Poly team is also gearing up to do Raman Spectroscopy on their bismuth nitrate material. They learned all about Stokes, Anti-Stokes and Raleigh spectroscopy and have decided to use Stokes for this experiment. If you want to learn about this method, reach out to the Poly team!

Mayfield’s Team PEAK added a second layer to their split Co/Fe-Zn plate (6:1 ratio). They are testing the hypothesis that applying multiple layers of solution onto the same spot will increase the success of a plate and aid in lessening the negative effects of contamination. The first half of the plate possesses two layers, while the second contains three. Team RAM finally got their sodium metavanadate to make a new vanadium solution. They made a plate with BiVNi in a ratio of 8:1:1, 8:1:5, 8:1:5. The results were in the light blue region, so they are continuing in that vein making a BiVNi plate with ratios of 8:1:1, 8:1:13, 8:1:16. Team SEA has decided to test various ratios of 2 metal combinations in more depth and so are using the following scheme below. The plan to eventually test Ti, Fe, Cr, Mg, Al, Cu all this way. 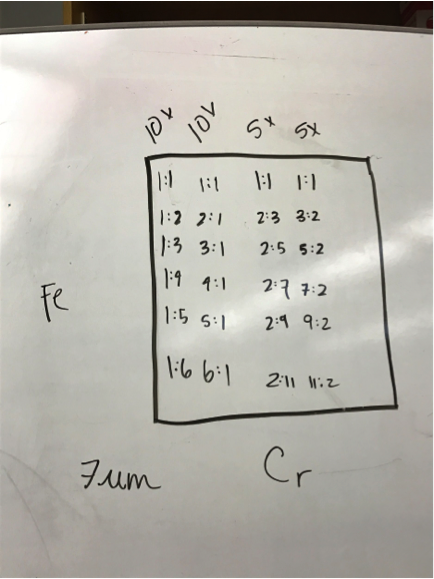