It’s been a few weeks since the first blog post of the year. Now it’s time for a recap of the past month as more and more teams have added updates to their google drive docs. Excuse the extra long post. We’ll be back to weekly updates soon!

Beckman has split into 4 groups, each testing a different 0.03M solution- Cd(NO3)2, Cr(NO3)2, Al(NO3)2, & Fe(NO3)2. Crescenta Valley has 3 teams. Team 1 made a 0.04 M BiVO4 plate and is considering mixing other solutions with BiVO4 in future. Team 2 made 1:2 ratio CoCl2 and FeNO3 and plans to study coffee-ring effect and using tesla coil in future. Team 3 continued with 0.5M MnCl2 but added .1M CoCl2 to the plate this time. Plates will be tested in future weeks. PCC completed a round of 11 plates testing bismuth and various other metals. They made 0.05M solutions and tested mixtures of Bismuth + Tin (II), Bismuth + Tin (IV), Bismuth + Manganese, Bismuth + Aluminum, Bismuth + Zinc, Bismuth + Iron. Interestingly bismuth by itself had the best results shown below. They plan to increase the metal concentrations and try mixing more than two metals. They also mention trouble aligning every spot with the LED and will be working on a new template. 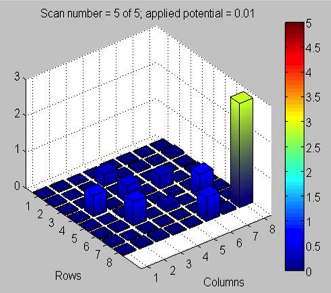 Poly decided to test potassium manganese and sodium manganese oxide because the band gap for both solutions was within 1.5 V, which is what we are looking for. Made 0.1 M MnO4 & 0.1 M KNO3 stock solutions and 11 dilutions of each which will be mixed in varying ratios from 100% Mn to 100% K. Did the same for Mn and Na. The plates were baked on a 300 degree hotplate for 1 min after spotting to prevent coffee rings. Testing showed low currents, but dark current readings may have been unreliable for a few of the tests.

Mayfield has 3 teams: FAM, JES & KEY. The first four plates FAM tested had combinations of Fe:Co, Fe:Cu, Fe:Ni, and Fe:Zn. The two plates that had the best results (not dark blue) were Fe:Ni and Fe:Zn, which has also been shown by a past Mayfield team. They also tried using a Tesla coil to decrease coffee-rings but had some trouble with spots spreading too wide. JES is studying light absorption by colored materials. They are basing their research off of summer 2015 research by Caitlyn Delgadillo and an iron and nickel layering technique. Based on their research of artificial photosynthesis, KEY wants to investigate magnesium cofactors, especially iron and nickel since they are earth abundant and tend to do well in photocatalytic materials. The ratios tested had low current and flaked into solution. They plan to look into stabilizing agents or other metal combinations found more commonly in chloroplasts.

Finally San Marino has lots of updates from their two teams over the past month.

Blank team: Spotted one plate using 5 varying concentrations of CuSO4 and ZnSO4 salts totaling 20 microliters per spot.  After firing the Cu spots appeared white, but turned blue in solution and green upon removal. The current readings were all low, but the color changes were interesting so they remade the plate with CuCl2 instead of CuSO4 and only 10 microliter spots. They included spots of pure FeNO3, CuSO4, and ZnSO4 as controls. The wire was exposed and interfered with results so they will need to retest. They also remade this plate with CuSO4 instead of CuCl2 to directly compare to the other subteam’s results.

Green somethings: Tested a plate half (Fe2+, Fe3+, Cu2+) and half (Fe3+, Zn2+, Co2+). Only spots of 100% Cu2+ showed activity, everything else was dark blue. The spots were black and flaked during testing. Not sure if it was cuprous (I) or cupric (II) oxide, but Cu2O has a band gap of 1.2 eV, while CuO has 1.2eV. For the next plate, they chose to test Fe3+ (best performing iron cation), Ce3+ (from the Pourbaix diagram of electrical activity at pH 13), and Co2+ (also from the Pourbaix). Six ratios were made, alternating between 100:0 and 50:50 combos. All spots were 5 μL, and all solutions were 0.1M except for the Co2+, which was 0.05M. They also added  a few spots of CuSO4 and CuCl2. The white cerium spots flaked during testing. Results were all dark blue. This could mean that solutions with Cu and Fe from 2 weeks ago could have been a fluke. A possible explanation is that amongst the group, there was a good catalyst and a bad light absorber, or everything was a medium catalyst. The difference in temperature at which the plates were fired could have also affected the performance of copper and iron on the plate. Two weeks ago, the plate was fired at 700°F but this plate was fired at 425°F.